The Democratic presidential candidate’s tax proposal includes an increase of the top individual income tax rate to 39.6 percent and a raising of the corporate tax rate to 28 percent.

President Donald Trump tweeted last week: “Remember, BIDEN is going to raise your taxes at a level never seen before. This will not only be very costly for you, it will destroy our economy, which is coming back very rapidly.”

However, nonpartisan think tanks argue only a small percentage of taxpayers will face a tax increase, with mostly high-income households effected, while middle class families are expected to see tax cuts under Biden’s proposed policies.

Marginal and Average Tax Rates—here’s how they differ

Source: The Center on Budget and Policy Priorities (CBPP)

A report earlier this month by the Institute on Taxation and Economic Policy (ITEP), a nonpartisan think tank based in Washington, D.C., noted: “Just 1.9 percent of taxpayers would see a direct tax hike (an increase in either personal income taxes, payroll taxes, or both) if Biden’s tax proposals were in effect in 2022. The share of taxpayers affected in each state would vary from a low of 0.6 percent in West Virginia to a high of 3.7 percent in Connecticut.”

The ITEP report, which looked at the impact of Biden’s proposed personal income tax and payroll tax increases for 2022, included an outline of the “Share of Tax Change” across seven different income groups (ranging from the richest 1 percent to poorest 20 percent in the country).

Speaking to Newsweek, Steve Wamhoff, the director of federal tax policy at ITEP and co-author of the latest ITEP report, said: “In other words, when we look at the taxes that individuals pay directly, we find that Biden would raise them for less than two percent of Americans, and that figure does not vary much by state. Even in the richest states, that figure would not reach even four percent. You would need to be among the lucky few to pay more under Biden’s plan.”

A report last month by the Penn Wharton Budget Model (PWBM) from the University of Pennsylvania, which was updated on Wednesday, also noted: “Under the Biden tax plan, households with adjusted gross income (AGI) of $400,000 per year or less would not see their taxes increase directly but would see lower investment returns and wages as a result of corporate tax increases.

Under Biden’s tax policies, federal effective marginal tax rates (EMTR) would increase for high-income households, while those below the $400,000 income bracket would not see a change in federal EMTRs, according to the PWBM. 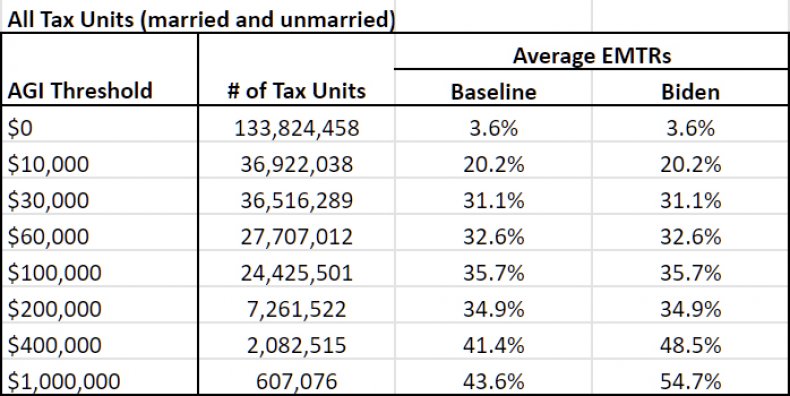 Jason Furman, a nonresident senior fellow at the Peterson Institute for International Economics (PIIE), a nonpartisan think tank based in the capital, told Newsweek: “Joe Biden’s tax proposals would cut taxes for middle-class families, mostly those with children, while raising them on households making over $400,000.”

“The plan also cuts taxes for low- and middle-income households by expanding tax credits. The most substantial expansion is the temporary expansion of the child tax credit in 2021 and 2022. So in the near-term, states with more children per capita will see larger tax cuts for low and middle income households,” Mermin added.

According to analysis by the Tax Foundation, a right-leaning think tank based in Washington, D.C., combined top marginal SALT rates in the U.S. would be the highest they’ve been since the 1986 Tax Reform Act, which lowered the top tax rate for individuals from 50 percent to 28 percent.

“In 1986, before the provisions of the Tax Reform Act of 1986 went into effect, seven states and the District of Columbia featured combined top marginal rates higher than California’s under the Biden plan, led by New York at a combined 63.9 percent,” the think tank noted.

Biden’s published tax plan, which does not include the repeal of the SALT deduction cap, would also see “the all-in federal rates” at their highest level since 1981, the think tank claimed.

However, in a blog post on the ITEP website, Wamhoof noted: “The Tax Foundation report points out that the personal income tax and payroll taxes together under Biden’s plan could result in a top marginal tax rate for the rich approaching 50 percent.

Personal income tax rates would remain the same but taxable income amounting to over $400,000 would be “subject to the higher [tax] rates that applied before the Trump tax law went into effect,” Wamhoof noted.

According to a report earlier this month by the Hoover Institution, a right-leaning think tank based in California, the increase in business taxes under Biden’s tax plan could drive companies out of business and reduce employment, with an estimated 73 percent of firms expected to face a tax hike.

“Pass-through entities employ more than 40 million workers in the United States, and the fully phased in Biden plan would increase the top tax rate on these entities by more than 25 percent, especially because of the payroll tax increase.

“These affected shares of total employment range from a low of 31 percent in Hawaii to 51 percent in Idaho. Idaho, Montana, and Wyoming would be particularly hard hit, as pass-through businesses provide a majority of employment in each of these states,” the report added. 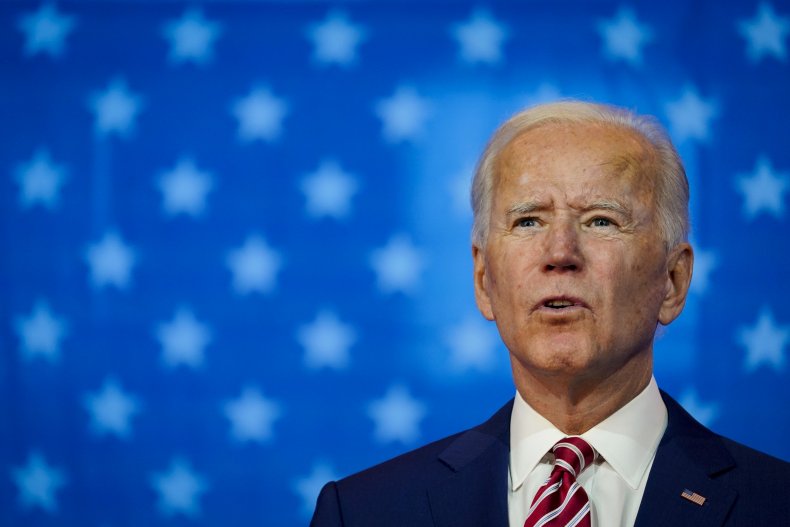 The 2020 presidential election takes place on November 3. Biden was reported to be leading Trump in Wisconsin, Pennsylvania, Michigan, North Carolina, Florida and Arizona—six key states—according to the latest Reuters/Ipsos online polls of likely voters, which were published Tuesday.

The polls were each conducted among around 1,000 likely voters and each poll had a credibility interval of four percentage points.

The graphic below, produced by Statista, illustrates winning margins of U.S. presidential elections since 1980. 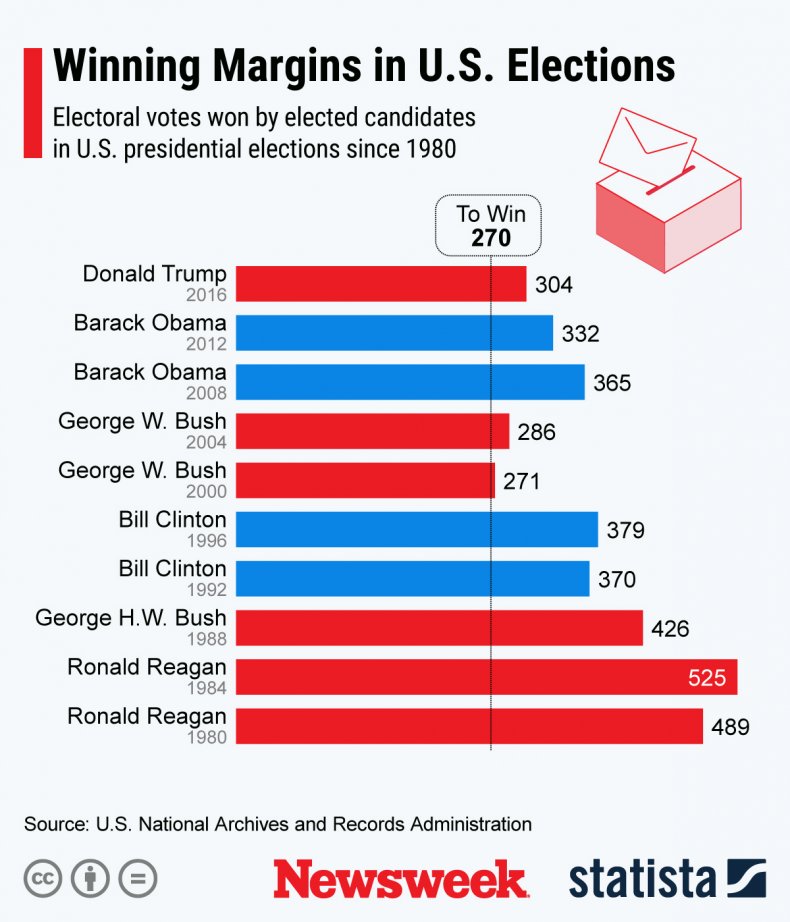