In a Nutshell, Why American Capitalism Succeeded

How did the United States become the world’s center of business growth following its founding in 1776? Surely a number of nations had powerful natural resources, stable financial and legal institutions, and dynamic entrepreneurs over that same span. Why was American capitalism so successful, so unique?

Harvard Business School’s Walter Friedman not only answers that question but does so in just 150 pages in the recently released American Business History: A Very Short Introduction.

The book is part of Oxford’s Very Short Introduction series, which provides concise surveys of broad subjects, from philosophy and globalization to more idiosyncratic topics, such as teeth. The books are only 35,000 words, about one-third the length of a typical book, and can be read in a few hours. “The audible version of my book clocks in at five and one-half hours,” says Friedman, director of the Business History Initiative and a lecturer at Harvard Business School.

Sean Silverthorne: Tell me a little about the book.

Walter Friedman: My assignment was to write a narrative history, stretching roughly from the arrival of European merchants in North America to the present, that would trace the rise of business in the United States. The book introduces readers to innovative business leaders, like Francis Cabot Lowell, who helped bring textile manufacturing, and the Industrial Revolution, to New England; Lydia Pinkham, who pioneered advertising techniques, including testimonials, in the sale of her alcohol-and-herb-based medicine for women; John Merrick, a founder of the North Carolina Mutual Life Insurance Company, one of a number of African-American-owned companies in Durham in the early 20th century; and Edwin Land, founder of Polaroid, whose work married art and technology in ways that anticipated what Steve Jobs accomplished at Apple.

Silverthorne: As an author, it’s often more challenging to write less about a subject than more. How did you go about organizing your task of covering four centuries of capitalist dynamism into just 150 pages?

Friedman: In thinking through how to organize this project, I was struck by James Truslow Adam’s 1929 book Our Business Civilization, which argued that, unlike prior countries in history, “business” had come to dominate American society, politics, and culture. At the time he wrote, a former mining executive, Herbert Hoover, entered the White House, and Andrew Mellon, a titan of banking, aluminum, and oil, had been treasury secretary for most of the decade. Other observers at the time came to similar conclusions as Adams, including the novelist Sinclair Lewis whose book Babbitt (1922) portrayed a real-estate salesman as an archetypal American.

I structured the book around trying to understand why business had come to have such a central place in America and to assessing the consequences of a society so shaped by business.

Silverthorne: What one finding in your book is likely to surprise readers most?

Friedman: The longevity of some firms might be surprising—Colgate-Palmolive dates back to 1806 and Chase Manhattan, all the way back to 1799.

DuPont has a history nearly as old as the nation. It was founded near Wilmington, Delaware, in 1802, during the presidency of Thomas Jefferson, by an immigrant from France who imported French manufacturing technology. The company has played a major role in America’s history. It sold gun powder during the 1812 war and dynamite to aid in the construction of canals and early roads. It pioneered the M-Form, or multidivisional structure of corporate organization that became standard at many US firms in the 20th century and was then exported to corporations in other countries. Its owners helped form General Motors and placed Alfred Sloan at the helm of that firm—which for many years was the nation’s largest enterprise.

DuPont also helped to introduce many products, including nylon for clothing and chemicals that allowed for refrigeration. The company was involved in the construction of the atomic bomb and in the space program. While the vast majority of firms have either failed or been short-lived, some, like DuPont, have reinvented themselves many times over the decades.

Silverthorne: You list four themes that contributed to the rise of American business: growth-friendly policymaking; business-friendly financial institutions; the professionalization of the managerial class; and the inventiveness and dynamism of entrepreneurs. Are any of these more significant than the others?

Friedman: All of these factors, taken together, have been essential. In shaping these themes I’ve drawn on the work of previous historians at HBS, from Alfred Chandler, whose Visible Hand: The Managerial Revolution in American Business, described the rise of the managerial class, and Thomas K. McCraw, who wrote Founders and Finance: How Hamilton, Gallatin, and Other Immigrants Forged a New Economy. McCraw’s book not only highlighted the role of financial institutions in promoting growth, but also looked at how the US benefitted from a global immigration of entrepreneurial talent. These immigrant entrepreneurs included Alexander Hamilton (from Saint Kitts and Nevis), featured in McCraw’s book, and continued through countless others, including Thomas Mellon (Ireland), Diane von Furstenberg (Belgium), and Google co-founder Sergey Brin (Russia).

Silverthorne: Why couldn’t other nations match what the US accomplished during this period?

Friedman: For one thing, the US benefitted by its vast geographic scale, which allowed for waves of innovation to spread in clusters across the country. This is evident in New Bedford and the whaling industry, Pittsburgh and iron and steel, Chicago and meatpacking, Detroit and automobiles, and San Francisco and computers and other aspects of IT innovation. Each of these regions developed large businesses that then were surrounded by a range of specialized suppliers, financial supporters, and training and apprentice programs. The scale of the country has given the US many frontiers of innovation, rather than just one or two.

Silverthorne: If you were to write this book again in 50 years, do you think the same four factors would hold true, or are there new forces at work that might accelerate or threaten America’s economic growth?

Friedman: Policymakers will have to strive to stimulate innovation while also suppressing the worst aspects of capitalism. Whether or not the US will be a home for democratic entrepreneurship, though, will depend on whether it lives up to its principles.

Social protests have helped to highlight the significant challenges faced by the country. Along with protesting racially motivated violence, the Black Lives Matter movement has opened broader conversations around social justice, including the need for economic opportunity to be far more inclusive. This need for greater inclusion is a vast and systemic challenge, of course, not just to business, but to education, law, policy, and culture.

Moreover, business and government leaders, working together, also face massive challenges that they have not sufficiently confronted before, such as climate change and the recurrent possibility, now realized, of global pandemics. These challenges, domestic and global in nature, will test the vitality, credibility, and effectiveness of US business in the decades to come.

Sean Silverthorne is a writer based in the Boston area.
[Image: gyn9038] 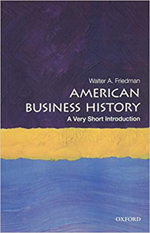 The thought of the United States becoming the world’s richest and most powerful nation would have been unimaginable at the time of the country’s founding. In 1783, at the end of the American Revolution, the United States was a marginal commercial center, far from the powers of Europe and the riches of Asia. It was a farm-based, subsistence economy with a small export trade in grains, tobacco, and salted fish and limited manufacturing.

In 1800, the US census, which excluded Native Americans, counted the population at 5.3 million people, about 17 percent of whom were enslaved. The population was significantly smaller
than that of Great Britain, which stood at about 10.5 million people, and that of France, with 26.8 million, let alone China, the most populous nation, with 300 million.

In the nineteenth century, the United States, like several European countries, experienced unprecedented economic growth and a rise in per capita income. In terms of wealth, in 1820, the gross domestic product per capita of the United States was just below that of Italy and the Netherlands and about two-thirds that of Great Britain. Much of the rise in aggregate and per capita wealth in the United States, in the decades after independence until the Civil War, came from a growing manufacturing sector, especially in textiles; a rising international trade in commodities such as whale oil; and improvements in the enlistment of new energy sources, especially coal, and advancements in transportation in the form of canals and railroads. It rested, too, through the mid-1860s, on a cruel and brutal slave-based plantation system in the South producing raw cotton for the global economy.

In the late nineteenth century, the United States outpaced its European rivals in rate of population growth, industrial output, and agriculture. A major factor spurring this rise in wealth was the continued growth of business enterprise and the government policies that enabled its unprecedented scale and scope.

Moreover, the size of the country’s largest firms—which by then had as many as several thousand employees—meant that managerial and executive decision-making impacted not only the firm itself but also, in some instances, national economic achievements and trajectories.

Yet the growth of business in America was neither automatic nor predetermined. The idea that business would come to shape so much of American life, altering the very landscape and skyline of the country, would not have occurred to the nation’s founders. Nor would Adam Smith, who penned his classic economic treatise, The Wealth of Nations, in 1776, have predicted the rise of business in such a spectacular fashion. In Smith’s time, businesses shared none of the characteristics of modern enterprise—no separation of ownership and management, no professional managers, and no corporate bureaucracies. Smith could hardly have foreseen the
development of a large, complex corporation like General Motors, which by 1955 had 624,000 employees around the world.

By the early twentieth century, the United States was frequently described as having a culture dominated by business. In 1929, Pulitzer Prize–winning historian James Truslow Adams published Our Business Civilization, which conveyed the extent to which business had permeated American society. In America, Adams wrote, “unlike Europe, the business man . . . finds himself the dominant power in the life of the nation and almost alone in his
control over the direction of its entire life, economic, social, intellectual, religious, and political.” He added, “It is a situation that, so far as I know, is unique in history.”

More recently, the historian Sven Beckert likened iconic classical architecture to the extensive commercial and industrial infrastructure that spread across the United States during the
nineteenth and twentieth centuries: “While Athens had its Parthenon and Rome its Colosseum, the United States had its River Rouge Factory in Detroit [and] the stockyards of Chicago.”
In each case, these structures seemed to somehow capture the essence of these societies.

But how did business organizations gain such a central place in American society? What was it about the United States that made the country so alluring to entrepreneurs, both foreign and
domestic? How did the United States come to have the largest business enterprises in the world by the early twentieth century? Moreover, what was the nature of a society in which businesspeople played such a leading role—not just in economic affairs, but also in politics and culture?

2021 Brings Management Modifications to the Delaware Division of Labor

Biden Meets With US Employees, Companies Impacted by Coronavirus

Four Good Causes to Have a Roofing Contractor Roof Your Residence…

The ACA: Hoping their healthcare survives | The Newest from WDEL…