Don Hollenbeck lives in a world where he has to keep a lot of balls in the air.

Tens of billions of them.

Hollenbeck is president of Craig Technologies in Seaford, which primarily manufactures precision ground plastic balls for bearings and valves. Hollenbeck says that his company’s ability to produce any size ball in any material within special tolerances is what differentiates it from three other U.S. competitors and many more in China, India, Indonesia and Thailand. These countries supply the world with high-volume commodity balls.

Basically, the company produces balls for industries – and the list is long – where there’s fluid or a bearing involved, including everyday appliances like automatic drip coffee makers and products that can be purchased in grocery stores using non-aerosol spray pumps that dispense cleaning solutions, fragrances and food products,  Hollenbeck says.

His father, Craig, is recognized as a pioneer in the business for moving production in the 1960s from metal balls to plastic, which were cheaper to produce and offered better chemical resistance. Hollenbeck describes Craig Technologies as “the mother ship” that has bought, sold and absorbed a number of companies over the last 50 years, including Salisbury, Maryland-based Manufacturing Support Industries (MSI) in 2017.

“We had found it difficult to bid on military projects,” says Hollenbeck. “One way to get into that business was to acquire MSI, which manufactures high-precision weaponry components for the military. That purchase opened the door for us to bid on parts that MSI would not be able to manufacture. We’ve brought some of that manufacturing into Seaford, where our machine shop is a sub-contractor for MSI-making gun components.”

Hollenbeck says the company never planned to “acquire these other companies, but there were opportunities that came along – suppliers with financial difficulties that we couldn’t afford to lose and partners and customers that were struggling. We basically decided that we wanted to build and maintain everything internally and focus on making smart business decisions.”

Sometimes those business decisions have included selling some or all of the operations to others. For example, it sold Flow Smart, a producer of high-purity polymer components that it bought in 2007 and moved to Delaware from New Jersey to Watson Marlow Fluid Technology in 2015.

None of this would be possible without state, county and local support, Hollenbeck readily concedes, noting the growth exploded after the company made the decision in 1998 to leave its Pennsylvania facility. It purchased a 25,000-square-foot industrial facility in Seaford Industrial Park (providing employee housing for free for the first year after moving) and expanded its ball-grinding capacity and re-entered high-volume ball manufacturing for the aforementioned automotive and non-aerosol spray pump industries.

“Delaware has been an extremely business-friendly state for us,” Hollenbeck says. “The financial support we’ve received from the State of Delaware, Sussex County and the City of Seaford is why we’re the size company we are and why we’ve been able to buy companies, facilities and equipment.” 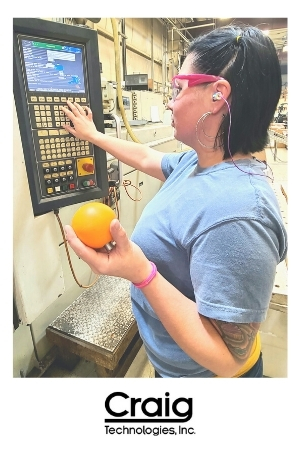 Hollenbeck says the company is expanding by upgrading with automation, adding a $500,000 Fanuc 5 axis Robodrill CNC milling machine with a 60-pallet magazine that gives it the ability to increase output with a machine that can run for days on end unattended. Hollenbeck quickly adds that the new machine acts as a third shift rather than replacing employees since it’s difficult to find the skilled labor he needs who want to work overnight.

The problem for the U.S. industry is that it taught China how to make balls, and that nation became dominant as buyers chose to go offshore for cost. This forced Craig Technologies to move to specialty ball manufacturing to preserve a business that generates more than $6 million in annual sales and employs 65 people in Delaware. Today, the focus at Craig Technologies is on “high-performance applications” where metal balls can be replaced with plastic.

“Each of our three competitors in the United States have been around for more than 50 years,” Hollenbeck says. “There are really no newcomers because the business is so capital intensive.”

So just how many balls does the company produce to customer specifications each year? After laughing and making a bit of calculation, Hollenbeck puts the number at about 25 billion.

New COVID-19 Guidelines For Delaware – Solely {Couples} Can Go To…